LASIK surgery is known around the world for its effectiveness in treating various eye conditions, but there are a lot of skeptics questioning it due to numerous myths and misconceptions. In today’s post, AAPECS Atlantic Eye Care, your number one choice for eyeglasses and eye services, sheds light on some of the most popular myths and misconceptions about LASIK surgery. 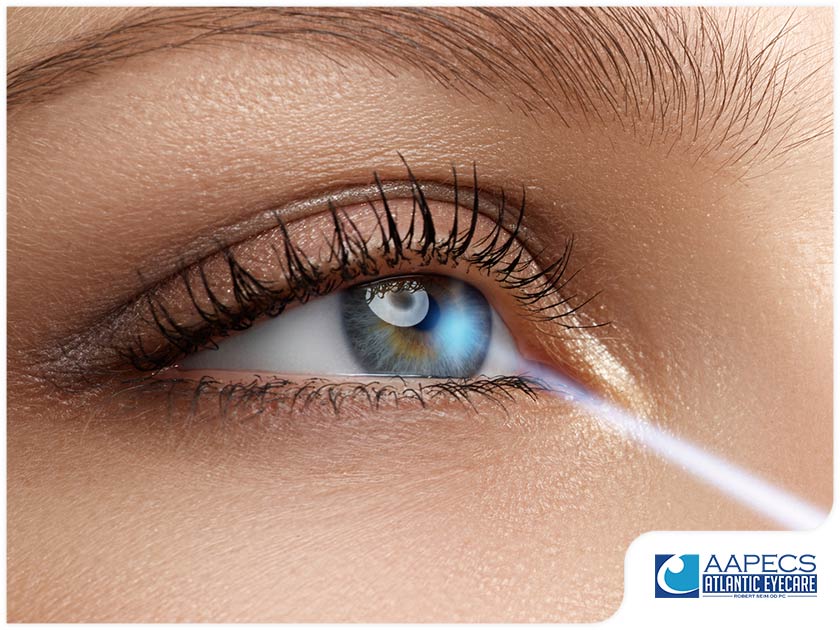 This myth is entirely false as LASIK surgery is essentially a fast and painless surgery. The only pain and discomfort you would experience lasts only for a brief moment due to the pressure applied when the corneal flap is created. People might have the notion that this surgery hurts because it uses lasers throughout the treatment. In fact, the lasers used are called “cold lasers” which won’t burn the surface of your eyes. However, if you feel extremely anxious before the surgery, you can request for a mild sedative to help put you at ease.

LASIK surgery is only prohibited for patients under 18 years old. There’s no upper-age limit to be qualified for LASIK surgery. You could be between 40 to 60 years old and still be in great shape to undergo LASIK. However, one caveat is that you shouldn’t have certain eye conditions that will prevent you from being qualified for LASIK surgery. Some examples of these conditions include cataracts, macular degeneration and glaucoma.

Some people argue that LASIK has long term effects that have yet to be discovered. This is entirely false since LASIK surgery has already been practiced in the medical industry for over 25 years with great success. In fact, long-term studies show that LASIK surgery is safe, and has paved the way in improving modern refractive surgery as technology has developed to make it more effective.

Do you need new contact lenses and other vision needs? Trust in AAPECS Atlantic Eyecare! Our passion is preserving and protecting your vision. Call us at (757) 340-7070 or fill out our contact form to request an appointment. We serve Virginia Beach as well as the rest of VA.

I can't help but respond to the negative reviews I read. An intelligent person understands everyone's situation is different. My husband and I have been treated with utmost respect . My husband has had his glasses adjusted many times and it's no problem. My appointments are lengthy , for I have glaucoma and there is a battery of tests. They can't help that. I want to add my glaucoma is under perfect control which is great for this is a progressive disease.

I've gone to Atlantic Eye Care for over 15 years and they have always taken care of me and been wonderful. Even when I moved a few hours away, I came back just to have my eye appointments.

My family and I have been using Atlantic Eyecare for many years. They have always been very professional and polite. I even went to another OD once trying to save a dollar only to find I did not experience the same satisfaction that Dr Seim and his staff gives. I would highly recommend everyone to use their services!!! Thank You Atlantic Eyecare!

I've been coming here for 15 years. I wouldn't go anywhere else.

I also had Lasik done about 2 years ago and was able to see 20/20 for about a year and half and then I started to notice a slight change in my vision. I went back in and Dr. Frenkel confirmed that my vision had sligtly decreased in my right eye. Apperently this can happen, like a normal eye can lose vision over time. He was able to determine that he could refine my vision in that eye by immiadetly offereing to do an enhancement surgery on it, free of charge. I had heard most places will often charge for enhancements, so I was very happy Dr. Frenkel was so nice to offer it to me. I believe Lasik is all about having a realistic mindset and those that say negatives things regarding their experience never had the right mind set.

Had cataract surgery done by Dr. Frenkel and had great results. even though i was given a detailed instructions sheet i still had questions after my surgery, but one of the girls there, Wendy was very helpful and answered all my questions and remained patient with me.

I had lasik done in 2011 had great results. The staff fully explained all post operations instructions and what to expect very well, About a year later i started to notice a slight change in my vision, i was told this might happen at some point, but I came in to Dr. Frenkel and he did another surgery to fix it that week no charge and it only took at 5 min for the surgery. Highly recommend.

AAPECS Eye Care is the best experience I've ever had with any eye specialist! Their Dr. and staff is kind, helpful, and work very diligently so you receive maximum care and service with your appointment while spending minimal time in a doctor's office ! VERY HIGHLY RECOMMENDED FOR PEOPLE NEEDING AN OPHTHALMOLOGIST IN THE HAMPTON ROADS AREA

AAPECS is a doctor's office like no other. They bring to the table the unbeatable combination of confidence and speed and their website explains it best. ""The unique ""Patient Focused"" orientation at AAPECS Eye Care creates an atmosphere of confidence, trust, and relaxation. In addition, statistics from one of the area's largest insurers suggested that AAPECS Eye Care is the most cost-effective eye care center in southeastern Virginia."" The fossils are pretty cool too ! =)

Excellent visit, staff were all pleasant and very professional.

I had Lasik yesterday and today I can see better then I thought I would. It didn't hurt and even during these recovery days it has not hurt. The staff was awesome and very informative. I recommend Lasik to all and recommend this place too.

Went in for blurrv vision and found out that I had cataracts in both of my eyes. I was able to learn all about the surgery and schedule it all in the same appointment. I had surgery 2 weeks later and was able to see and drive the very next day. I was very happy with my results.

My husband had Lasik with Dr. Frenkel a year or so ago. I loved the staff and the doctor was just as nice and informative as can be. I even got to watch my husbands surgery on a tv screen in the waiting room. AAPECS had been referred to us by several friends who were happy with his work, we became some of those happy patients! My husbands vision has never been better and Dr.Frenkel even saw me on a sunday afternoon in his office when i got a small piece of metal in my eye- how cool is that?? Now my mother in law sees him for her glaucoma and we are life long patients!

I had cosmetic eyelid surgery done, as I had extra skin on my lids that gave my eyes a ""hooded"" look. I had a friend who had the same surgery done from a different dotor; she scared me with all these stories of extreme pain and discomfort. So needless to say I went into the surgery with extreme nerves. The staff was very helpful and Dr. Frenkel assured me everything I heard was not truthful, and that I would be perfectly okay with only some minor brusing and sorness. He was completely right. and my eye lids turned out great with most all of the brusing gone in less than a week.